POETRY ON THE LINE 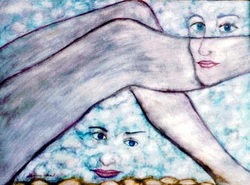 Keeping that statement in mind, I think of this site as pages from my own personal "Book of Folly", or as a more critical voice might say, a tribute to my own vanity.  Having passed the milestone of turning 50 last year, unconsciously a time of reflection, of perspective, seemed to be in order.  This included doing my best to take a clear-eyed look at my own writing and art.  In the past couple of months I've been revising my Bio to read:﻿  As a writer and artist publishing for the last three decades, Stephen Mead thinks his bio reads akin to the lines of Emily Dickinson:  "I am Nobody.  Who are you?", which puts him in good company with all the other struggling creators out there.  At this point, he is reconciled to the fact that his art will never sell or even change lives dramatically but is grateful that The Leslie Lohman Museum has accepted the bulk of his work as an estate donation. Still, Googling the words "Stephen Mead Art", a person will be able to find links to his multi-media pieces and sometimes the semblance of a tip jar.

I hope others don't find such a summation too annoying,

"You can't win the lottery if you don't buy a ticket," has become fairly standard wisdom which also applies to how I rarely pay fees to enter writing or art contests any more.  For the most part I've decided the submission fees could be spent better elsewhere, such as at the grocery store.  Is this frugality, practicality, being cheap, or a viewpoint tinged with the slight tang of sour grapes for all the times I've put money down and not made the cut?  I believe it is simply facing reality.  When it comes to poetry I am more of a cobbler, and although themes return throughout my work  I can't quite bring myself to believe my writing over the years has still managed to shape itself into strong vision/voice, a cohesive whole.  Most poetry books I've kept abreast of read like novels, biographies or autobiographies, and in doing so have a consistent clarity I believe I may never have.

Fits and starts:  Most of the poems on this site (which have had the good fortune of remaining connected to viable links), are part of manuscripts I've entered into the occasional contest over the years, and may still continue to do so, yet the urgency, the semi-desperate sense of needing to be validated by publication via a legitimate book press, has faded.  Perhaps it is licking my wounds before they even occur to think:  OK, with publication, depending on the contest a person can win somewhere between $200 and $1,000, or in rare instances, $5,000 - $10,000, and that truly is all very nice and good, but not enough to give up the day job. I mean a part of me figures someone else can use the money more, someone perhaps more well-schooled whose book publication will also somehow help with professional respect and tenure.  Moreover, I figure that person already has a circle of readers and thus won't be stuck with a lot of author's copies cluttering up the house!

Self-publishing, print-on-demand, seemed a relatively smart way to avoid the above situation.  If memory serves I believe the first two books I tried it with were part of contests given by the self-publishing site, Lulu.com.  These were the novels "Hang Onto Your Teeth", written some time in the mid-late 1990s, and "Where Time Goes", written even earlier.  I revised them each extensively over the years, sought publication via the conventional route of agents and publishing houses without success, thus when the fairly revolutionary platform of Lulu came around, I thought: what the heck? By the time I dusted off and re-scanned, re-vised, and even found a typesetter for one of the novels, it seemed too late to turn back on entering the contests in 2007/2008 respectively, and then, later, a shame to pull the books back off the market once I'd spent so much time doing my best to prepare them for print.

In retrospect,  a part of me regards these books as apprentice works, books with their hearts in the right place, but dated in theme and, despite what I thought rigorous self-editing at the time, perhaps still over-written.  The theme of "Hang Onto Your Teeth", was that of a father coming to terms with his gay son's murder when this father had not been comfortable with his son's sexuality.  Today, at least in most developed nations, the tide has turned to, fortunately, make such a tale "old hat".  The same could be said for the earlier novel "Where Time Goes", a novel concerned with a young woman finding her voice as a musical artist, being side-tracked by teen pregnancy and ultimately, a child with Down's Syndrome.  At the time the novel was self-published I thought a book which touched on such themes as abortion and a woman's right to pro-choice  was also no longer necessarily pertinent to current dialogue.  Of course I could be wrong about both of these books.  I certainly had no idea how to market them and have remained true to that pattern with the self-published poetry-art hybrids which followed.  Actually, aside from thinking, in many instances I would need better photographs of the art, especially for "Selected Works" and "Our Book of Common Faith", it is the poetry-art hybrids which I feel are the most strong and clear of anything I have put into book form.    I also feel it made sense to self-publish them given how expensive it is for established publishing house to release "coffee table" books, and how much poetry-art isn't exactly a commercially-savvy way to become a household name!

As I write this "About" section for "Poetry on the Line", I am still wondering how much each word is part of the decision process to go on doing either writing or art.  I have completed a series begun in 2009 "According to the Order of Nature (We Too Are Cosmos Made)", and image excerpts have again been published here and there, thus perhaps I should just be content with that.  After all, aside from a poem or two, most of the work which appears on this site was written before the year 2000, so to not run headlong into attempting publishing is a concept I am pretty familiar with.  I mean I have envelopes and notebooks full of revised drafts written after 2000 which I just haven't gotten around to even typing.  The world doesn't seem the better or the worse for that.  I don't seem the better or the worse for that.

Ultimately, I suspect I am reaching that stage Anne Sexton eloquently described in her poem, "The Ambition Bird".
"I would like a simple life," she explains.  "Yet  all night I am laying /poems away in a long box./ It is my immortality box,/ my lay-away plan,/ my coffin."


She then adds:   "All dark wings/ flapping in my heart./ Each an ambition bird", until she finally concludes with:

I must get a new bird
and a new immortality box.
There is folly enough inside this one. "

Yes, Anne, thank you for your wisdom, now where-in-the-world, in which room, what drawer, have I stored all those notebooks?